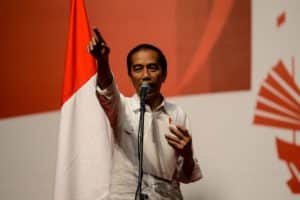 The reelected incumbent delivered his victory speech on Tuesday, promising to improve social justice through national development programs over the next five-year term of his presidency.

President Joko “Jokowi” Widodo, accompanied by running mate Ma’ruf Amin, delivered the speech before dozens of residents of a kampung deret (village of row houses) in Tanah Tinggi, Johar Baru, Central Jakarta, hours after the General Elections Commission (KPU) named the pair as the winner of the 2019 presidential election early on Tuesday morning.

The KPU’s final tally showed that Jokowi-Ma’ruf had won 85 million votes (55.5 percent), while rival Prabowo Subianto-Sandiaga Uno had won 68 million votes (44.5 percent). Following the announcement, Prabowo said that he would file an electoral dispute with the Constitutional Court.

Jokowi thanked the people of Indonesia for entrusting him and Ma’ruf with leading the country once they were inaugurated the president and vice president in October.

“We will translate the trust and mandate from the public into development programs that will be fair and equitable for all groups and social strata in all corners of Indonesia,” he said, adding that the pair would work hard to realize social justice “as the leaders and protectors of 100 percent of Indonesia’s citizens”.

Jokowi said that winning the presidential election meant that he would serve the people, look after the people’s interests and move “all components” to achieve prosperity and justice.

Kampung deret is part of an urban renewal program for a number of slum areas in the capital that Jokowi initiated in early 2014, when he was the Jakarta governor. Jokowi said he wanted the program to continue during his presidency.