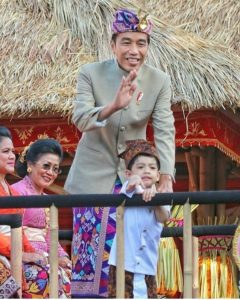 As reported by local media across Bali, Indonesia’s popular President won the hearts of those attending the parade by bringing members of his family who joined him in wearing traditional Balinese dress. Jan Ethes, the three-year-old grandson of the President, earned enthusiastic applause as he “escorted” his Grandfather and charmed the public dressed in a Balinese sarong, cummerbund, and traditional headpiece.

Balipost reports that the 3-year-old, who is pretty clearly the apple of his Grandfather’s eye, clutched a small toy motorcycle as he joined the President in waving to the appreciative crowd and passing parade. During a busy day of programs, however, the President found time to take Jan to Sanur beach where they played a friendly bout of one-on-one beach soccer.

Finding local attire to his liking, Jan Esthes insisted on wearing his Balinese outfit on the return flight to Jakarta on board the Presidential Aircraft.

A local cultural leader, Professor Wayan Dibia, saluted the President for wearing Balinese dress and encouraging his family and grandchild to follow suit as representing the Indonesian President’s embrace of the Nation’s multifarious cultural composition.

The opening of the parade that passed the Presidential Grandstand featured hundreds of “pendit” and “baris”dancers drawn from a Junior High School – SMK Negeri 3 Sukawati Gianyar. The students, only advised of their command opening performance for the parade, began the costume and make-up process at 7:00 am in Sukawati before arriving in Denpasar at 11:00 am – some 3 hours before the actual start of the parade.